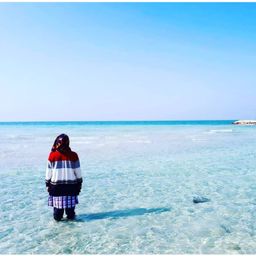 In this era of technology, almost everyone that has a mobile phone is connected to the social networking sites, where we meet or see different kinds of people everyday. People share a lot of things like there talents of photography, writing, painting etc. There are many by whom we are influenced and we tend to get inspired by their work. It indeed is a good platform for people to share their work. But because of social media a lot of people have started living a double life. They try to act different on social media than in reality. We start to get influenced by a lot of people not knowing who they really are, we get so much attached to them that we keep thinking about their life, we wanna be like them. Our own existence doesn't seem so important to us anymore. We might see a lot of people who keep sharing their happy moments, but maybe in reality they are not as happy. But we tend to believe them and think that we've been less gifted. Many friendships start on such platforms and we tend to believe in what we see there on social media. And if a person does try to show a completely different form of themselves on social media, its like lying to people about who you really are. You make them believe what in reality isn't.

And there are people who tend to share every detail of their private life on such platforms. We become so used to it that the real world starts to fade. We fail to enjoy so many moments, just because we are so much into thinking about how are we gonna share it on our profile. Rather than enjoying our lives, we start to enjoy people's reaction to it. We might not realise it, but there are people who might not have as much blessings as you and it hurts their sentiments.

On the other hand there are people who would share all the sad stuff of their life on social media, which help them gain people's sympathy, through which they wish to make friends. But most of the time all it does is make us used to it, and rather than finding a solution to it we start expecting that the people out there are going to help us.

It isn't that one should avoid social media, but we should rather make it a platform where people exchange ideas, where we can help each other learn new things and can be a source of inspiration for one another. You can share about your experiences that you've had. Share your opinions on the ongoing problems around the world, know what others have to say about it. Each one of us has a different way of thinking, each one of us has different talents, each one of us has something new to teach others. And we can only do this by sharing it with people.

Social media is meant for connecting people. So connect with people. There is a lot of negativity on it, try to overpower that. Use it to get the best out of you.

Effect Of Virtual World On Reality