Near-Death Experience Of My Life 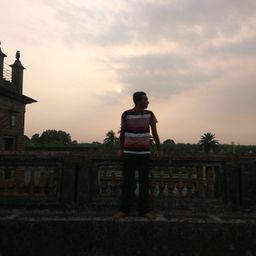 Today I am going to share about a critical moment in my life. You can call it a near-death experience in my life. It is quite ironical to say that I have experienced something like that on my tour, not just any tour; it is my only terminal tour of life. It Happened in the mid-way of our schedule, on a rainy day overwhelming all catastrophes in my living-days. In 2016, I enrolled in my board exams, Madhyamik, it ends on 8th February. And due to our pre-exclaimed timeline we set out from house on 18th February, brooding on Bhagirati Express and reached Kolkata at afternoon, and rested till midnight. We reached Dum Dum Airport at 3:00 A.M. Our flight was at the dawn, 5:00 A.M. As we catch out flight on time and do our checkings, it is a two and half hour journey. We reached Port Blair, central of Andaman and Nicobar Islands.

We set foot in our hotel at 8:00 A.M. According to our timeline, this concluding day, is fixed for the side-scenes. So without getting a rest we carry out fatigue with us and wandered around the capital visiting many eminent places, including ‘Cellular jail’, ‘Anthropological Club’ and ‘Sagarika’. We completed this day with mesmerizing experiences, discovered in a foreign place. But it is not that day when the extreme has happened. It is the day before storm, calm before the catastrophe.

But it became infamous to us for our lifetime. As pre-mentioned we left hotel as morning 7 A.M. with our private car and driver, both were set before by our travel agency. It is quite a long journey to reach there. 130 kilometres is the primal distance between Port Blair and the dock of Baratang then you have to hire a launch to reach the main place. Leave those matters aside as we are not focusing on the trip. The incident happened on the highway to the docks.

“We are all already aware of Jarawas, the old inhabitants and the tribe of Andaman. Since 1998, they have been increasing contact with the outside world and have increasingly been the initiators of such contacts.”

Before going to the trip, my father’s colleague told us that it is a quite fortunate matter to be able to watch them, during this driveway. But for our journey this very fortune is the key for triggering such a fatal moment. We crossed our first tollbooth at 10 A.M. (30 kilometres) and from here it is an one way drive and all the cars will go on in a consecutive line, maintaining their visible contact with each other. This precaution was being circulated by the forest rangers and according to them, they very moment you cross the booth it is under the residential area of Jarawas. And it also proved in around 10 Kilometres. We spotted the first Jarawa family carrying a deer with them, maybe their prey. As our journey went on we came to watch many of them on the road. Some were carrying bows with them and some made eye-contact with us. We were following a private bus which consists 6 families; they were on a group trip. On the back seat of the bus, there was a young couple, engaged in photographing, snatched every possible moment on the road. The incident happened when we came across three adult-Jarawas. They all were carrying axes. Maybe they were collecting woods from the forest and returning home. One of them was carrying all the logs and that made my previous conclusion about them. When the early bus just crossed them, one of them shouted in high tone – “Uoowah”, quite high to ring our bells. And suddenly the second one throws his axe at the bus. The last couple was quite lucky as the axe just hit under the glass window, leaving a deep dent on it. Yes the danger can be gone, but the brainless bus driver stops his bus at this nick of time, making all the end trail of cars stopped. We became astonished and frightened by their sudden act. The Jarawa who shoots his axe, went on running to the bus-door and knocked it roughly. And the bus-driver now, having no choice opened it. They went in the bus and we heard a panic in it, maybe something was happening in the there. We almost forget to take our breaths, in pick of our thrills. After a minute, they came down from the bus, carrying some mobile like gadgets with them. As I saw from my window, it seemed like a camera. And suddenly they went into the jungles beside the roads. In the meanwhile, our driver was calling the nearby forest rangers. They rushed at the spot but before their arrival the Jarawas were long gone. The whole trail of cars was stopped for almost 15 minutes and we resume our journey hereafter. At 2 P.M. we reached the docks and talked with the passengers of the bus to sketch out about the previous incident. They are informing the events in parallel way to the chief-ranger that the Jarawas came to the bus and went to the last couple and thrust knives on their faces and after a while they took their phones and camera, calmed down and left.

Tell me your views on this incident in the comment section and share your experiences if you have some same near-death experiences in life. I am waiting and thanks for spending your precious time to read this. Bye’ Until next time~~

Life Is A Matter Of Choices

3 Things I Learnt From Robin Sharma