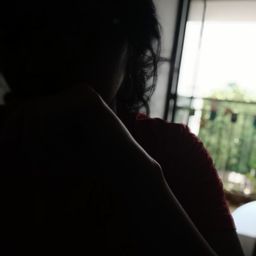 I hated the fact that our gym had an air conditioner.

I’m never allowed to switch it on because ‘what’s the point then',but it’s still there, kinda useless at this point.My muscle-man cousin allowed the fan though,so at least that was a plus. I also wished those windows had curtains,because if someone from the neighbourhood looked in,they’d be seeing some really funny/pathetic stuff,just saying.

It started off pretty easy,I went there to just walk on the treadmill like an old lady and not push myself at all but at least feel the exertion and feel satisfied becauseI’m doing something.Twenty minutes later I was sweating like a pig and ready to call it quits when my cousin decided to put me on something else.My legs already felt like jelly at this point.

“Squats.“ he said, giving me a demonstration. “You need to go nice and low and keep that slope like I’m showing you.Let’s do three sets."

My mouth dropped open in disbelief but my cousin was unrelenting, going back to lifting his huge dumbbells,not a sliver of space for an excuse behind his eyes.

Well,I mean if he can do it so can I. And thus I did the first twenty.My thighs burned and burned but I pushed through and promptly collapsed onto the floor. He allowed me a few minutes of rest,explaining the science behind the process before making me do the rest of it.

Understand that it’s quite an achievement for me.By the time I all but lay on the floor painting from the exertion,I was impressed with myself.For someone who does no exercise whatsoever,I was doing a pretty good job I’d say. Trying to comfort my muscles with promises of a nice burger when we’d go out later,I gulped in some air.

A minute later,my cousin comes up with the smallest dumbbells of the set,and hands them to me.I begin lifting,thinking this isn’t so bad, when he stops me mid way.“No,no.I want you to hold them by your sides and do lunges.”

I refused blatantly.More leg work?! No thank you,I was already wondering how I’ll walk without crying in pain for the next...three weeks at least.

With lots of persuading and encouragement and science from him,I decided to just get it over with and grabbed the weights.Lunges used to be my favourite things to do back in the school PE classes. Tapping into those memories,I,well, lunged.

And couldn’t get up.

My legs folded and I sat on the ground,confused.What just happened?

My cousin grabbed the dumbbells from me,rethinking his whole decision by the sheepish look on his face.“How about we try without the weights? Three sets of ten,come on. “

I got up groaning in pain and that’s when I realized in the back of my mind that I’m not coming out of this unscathed.My legs already felt horrible and weak,if they had a mouth they’d be begging me to stop.But no,I had to do it.I just had to,right?Isn’t there a saying,when you feel like quitting,remember why you started.And I did remember,but then I paused,thinking.

A Letter To The Past.