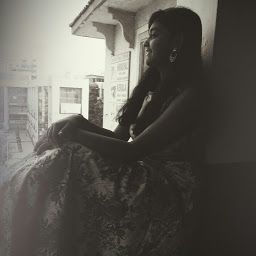 I am very well aware that the spelling of the title is incorrect, it should've been Grandparents right?

Well I just wanted to emphasize on the fact about our grandparents being 'Grand'.
I am a 16 year old girl living in a fantasy land which is a creation of my own mind, I believe in personal faebles and want things to happen my way. A part of my fantasy land was shattered when my maternal grandmother passed away in 2017, she was one of the most influential, charming and obviously the most beautiful person I had ever met. Spending just a few days with her every year in the heat-bustling month of May, would take me back to my roots and make me happy. I have been told of having traits like her and I guess that's what made our bond more special. Back to that dreaded month of August in 2017 when this pure soul departed from earth, I cried a lot. Obviously. My maternal grandfather had passed away when I was 7 years old and I had no fond memoriy recollection of him but my grandmother and I had spent months in the year of 2015 together, where I used to tell her school gossip and she would recite me stories as I slept.

She was the symbol of pure love to and for me and I will always be indebted to the values she has imparted and the impact of those values on my life.

My paternal Grandparents both alive and healthy are going to my father's sister's place in a few days, which prompted me to write This,

Our grandparents though aged can do so much to keep their children (our parents) happy and positive about life even when it means travelling for 12 hours to cover up a distance of 568 kilometres ... alone. To call them everyday and listen to them and their voice without any motive. To teach them chores and to correct them whenever their kids chose the wrong path to follow.

They raised their kids right and their kids are imparting the values of our grandparents in us. Most of us fail to recognise the importance of this Elderly figure in our lives but today I realised how much of an important role my grandparents played in my parents' life and mine as well.

I was and am blessed to have GRAND-parents who love and support me. I really hope that I've treated them well.

Grandparents : A Blessing To Live With

Cherish The Time Spent With Your Grandparents

To The Good Old Days