Between Rags And Riches 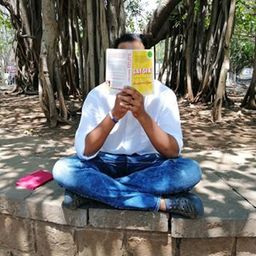 It was a warm and sunny afternoon, it was 2.00 Pm and you could have found me lying down on the mattress like a defeated soldier - I lived in apartment with four college mates on rent, the case with unemployed bachelor students is that all of them survive around the periphery of limited funds in their bank account. So, yeah, you wouldn't find anything that makes a home, home. There were no beds, but mattresses positioned at random places on the ground, and a bedsheet to cover it up. No sofas, no television, everything mostly scattered, dirt and just everyone's individual mattress and a wardrobe. I was dead asleep - there was already too much on the plate and I was going through somehow, trying to achieve too much too soon. Going through multiple days of late nights, early mornings and one meal a day. My mattress was adjacent to the transparent fibre window, and if there are no curtains the sunrays fall direct on you and usually at 1500 hours, you'd see the sun staring at you in the eye. It was 2.15 Pm, all I could see was my mattress and no force seemed strong enough to keep me away from sleep and I slept somehow in that unforgiving sunlight. Eventually, the heat made my palms sweat, I was already too tanned to feel my skin burning and the mental exhaustion was at the tip, I chose to sleep in distress. There are certain moments in life where, being uncomfortable is much more comfortable than to bear the discomfort of initiating another effort. I was at a phase where, I was probably moving ahead, but I couldn't see myself arriving anywhere.

45 minutes had passed and sweat begun to accumulate between the bulges of my skin on the neck. I couldn't continue to sleep, eyes were shut but the mind was awake in a dilemma - I wanted to sleep, but not this way. I got up and looked at myself in the mirror, I could hardly smile. Hair was scattered and the density felt a lot lesser than earlier, you could easily see the scalp through my hair, and that was enough of a bad news for a guy who wasn't even 21 yet. My face was tanned, not the sexy-holiday tan you'd expect it to be, but rather burnt - like a grilled piece of meat. Muscles were shrinking, and I had certainly lost a lot of weight. It was as if, everything that would make me unattractive, felt like it existed. I couldn't have felt more miserable, because keeping the unattractiveness part aside, there was a black screen casted over the meaning of 'happiness' in my dictionary. And there wasn't any escape-mechanism I could build. I splashed cold water several times on my face, partitioned my hair neatly with a comb, wore a clean T-shirt that read "Peace Out", and stormed out of the apartment.

The first thing that I wanted was Kaka's masala chai and cream-buns. Kaka was an old man in his late fifties, who had been in the art and trade of readymade tea from past ten years of his life and trust me, absolutely nothing could shake it out of its authenticity, at least for me. Nothing. And I had been a frequent customer at his stall for almost a year and a half now. Kaka was the most enthusiastic person I came across and he is always up for a pep talk - being in his late fifties, his hair was more towards a shade of grey, he had a thick mole below his right eye and while talking to him you'd find yourself staring at it from moment to moment. The pocket on his shirt always budged out, as he stores coins for change and some bundled papers in it. Wrinkles had taken over his skin, but he portrayed much more dynamic behaviour for his age. He was fond of me, it had been four days I hadn't seen him - so having me back he asked "Aye, what's going on? Where have you been? And you don't look good. Is everything alright?" In a low tone I responded "Yeah, maybe. Maybe, it's just the turbulence of life." And before I completed my sentence, masala chai and cream bun was in front of me. "Well, no doubt about it", he said while stirring the new batch of masala chai that he was preparing. "What do you mean?" I asked. "Turbulence is one thing mutual amidst everyone. I have struggles of my own", he responded. "But it never felt that way. I've always seen you at the utmost of your emotions, without worries. How do you do it?" I questioned out of astonishment and a little frustration.

"Because, I always chased happiness rather than things that I thought would make me happy. I always felt even if I have everything and don't feel happy, I don't necessarily have anything significant in my life. I've always loved serving people and listening to what they have to say, it's oddly satisfying for me and what's better than masala chai, a lit up cigarette and two people talking? I am utterly satisfied with how many relations I've build with people who were strangers at first and it amazes me to see how deeply I'm connected to them and their lives. If there was a bank account for the relations that I've built with people, I'm sure I'd be rich. Your problem is that you're looking for happiness in things that can't breathe, rather than people. You're looking for it in things that you can buy and things that you already own. You always convince your mind with that next exciting gadget you buy, but your heart never settles and that's why you're lost. You're lost because you don't know what you love. And you'll always find yourself wandering if you don't discover what ignites you from within". My chai ran out cold, I chucked it like a vodka shot, my pounding head felt frozen. It was as if, I've got an answer to something I wasn't actually seeking at that moment. I shook hands with Kaka and walked away.

I realised, I've seen more frustrated faces in a flight than I've seen in a train, in train journeys I've seen strangers bonding and having their home cooked meals together. I've usually seen older people waking up at 5.00 am and having political conversations over the Indian Railways' pantry tea - the ones usually served in a paper cup, with sweetened milk and a tea bag. I've seen most joyful faces at bus stands, where masons and workers board the local city bus. I've always seen them in a group, a unity - their lives might be miserable but it feels as if they're in it together. They probably don't know the brightest way to earn a living, but they know how to be happy. And that is what counts in the longer trade. We want to run as fast as we can and make it big, but I don't see a point of reaching there without a smile. Probably, it's time to breathe and think for a moment and then take a leap.