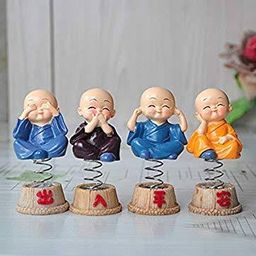 It is not without our villains that movies would fair in the box office and be recollected even after ages. It takes guts to act as an antagonist than the main character. There may be many others too but here goes the list who created a niche for themselves in the industry.

Now who don't remember this epic dialogue “AREY OH SAMBA !! KITNE AADMI THE". In the movie Sholay - Salim Khan offered Amjad Khan the role of dacoit Gabbar Singh. With this movie, he rose to stardom. He was an Indian actor and director who worked in 130 films in a career span of nearly 20 years.

He was one of the most successful villains in Bollywood, acted over more than 400 films in his career span of 38 years. Strange as it may seem, but Amrish Puri wanted to become a hero in Bollywood but he failed screen test and emerged as a marvelous villain of Indian history. Working as Mogambo in Mr. India (1987) is remembered the most and as Mola Ram in Indiana Jones and the Temple of Doom (1984) Steven Spielberg's Hollywood film to western audiences.

He is an Indian film actor, singer and film director worked over 190 primarily Bollywood movie since 1971. Denzongpa was awarded the Padma Shree which is India's fourth-highest civilian honour in the year 2003. Denzongpa is remembered best for his rival role of Bohra, who alter "Chitti" into an evil robot played by Rajnikanth.

He is also known by the name "Bad Man" in Bollywood.He is remembered for his iconic role as gangster "Kesariya Vilayti"in Ram Lakhan and "Kabeera" in Heri Pheri. He is an Indian actor who has appeared in over 400 films. From Bollywood to Hollywood and to international cinema he made his successful transition.

An Indian film and television actor. He has acted over 200 Bollywood movies along with television serial and Punjabi movies. He played a negative character in the movie Sharmeelee which helped him rose to fame. In the '70s and 80's he established himself as a leading villain.

Was an Indian actor and villain in Hindi cinema for 49 years. Pran appeared in over 350 films in his long and prolific years.He was honored withPadma Bhushan in 2001 andDadasaheb Phalke Award in 2013. Pran's performance was appreciated especially in Dilip Kumar starters such as Azaad (1955), Devdas (1955) as the negative character.

He came to fame after his movie Dushman, where he played a psychopathic killer. He received Filmfare award for the same and movie sangharsh. He is an Indian actor, worked majorly in Bollywood and working in other film industries like Tollywood and Kollywood .

Fondly called Dadamoni. He is considered to be one of India's finest actors ever, playing leading, antagonist and character roles with equal confidence. It was for the first time that hero played a negative character played in the movie Kismet(1943).The movie was severely criticized for glorifying crime and portraying a criminal in a good light. Ashok Kumar played a double role pickpocket and con man.

Best known for his performance as Jehangir Khan in ABCD. He proved himself as a versatile actor. He is an Indian film, Stage and television actor who chiefly works in Hindi Cinema. For the film Shoonya, he was bestowed for the best actor from the Festival of Arab and Asian cinema.

Mainly working in Hindi and Marathi cinema he is a film actor, writer, filmmaker. Best known for his negative role in Angaar( 1992) and Apaharan (2005) and recent flick Kaala opposite Rajnikanth. He won his Filmfare best villain awards for the same. For the categories of Best Actor, Best Supporting Actor and Best Villian, he is the only one to win.