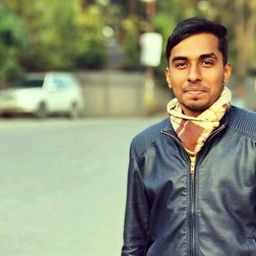 The word Kashmir means Dessicated Land. It is a very beautiful gift of nature. According to Hindu Mythology, earlier the valley was a lake full of water then Lord Bharmha somehow managed to let the water flow down so that people can live there. Kashmir has a very beautiful history of rulers of all religion. Originated by hindus which were succeeded by sikhs, later sikhs were succeeded by muslims.

There is no second opinion that the Kashmir as demarcated on maps is part of India, since before Independence everything was India and only after partition was there arises a Pakistan and its boundaries. Also legal documents can be used to prove that Maharaja Hari Singh agreed to be part of India due to mishandling of the issue by Pakistan.

As of present certain areas are governed by Pakistan, while the majority areas are with India (leave aside the Aksai Chin area that is with China). Now Pakistan's assertion that Kashmir should be part of Pakistan because of majority Muslim population might have been true in 1947 but as of today there are areas in India which too have Muslim majority, and that does not mean that they can start claiming those areas.

The part which Pakistan has legally occupied is POK, but if you look more deeply in the Kashmir valley, or go beyond Srinagar then you will find some achromaticness among the people’s, i.e. they are like..i am completely hopeless, i can’t do anything. This thing act like a fire blower for Pakistan, with this hopelessness they can ask anything from the locals there to do on the cost of few pennies.

They have very less or even no source of entertainment there, no TV channels nothing, sometimes they don’t even have net connectivity!

As far as Indian Media is concerned, they casts Kashmir like, there is no development there. For instance, if a Delhi boy achieves something great it will not be that breaking news but if any kashmiri boy does that, it will be the breaking news for long days!

So this way..indirectly, somehow they are being successful in occupying Kashmir too.
When you will talk to any Kashmiri for their views about india, they are expressing hate towards country nd army both!..this is what Pakistan wants!!!

So somehow our government has been unsuccessful in interacting with the local kashmiris which might effect them in future. And if India wants to have the chicken's neck for forever then we have to do something now.

Kashmiri Cuisine: Adding New Taste And Richness To Food And Its Making