What Are The Things On Should Never Do 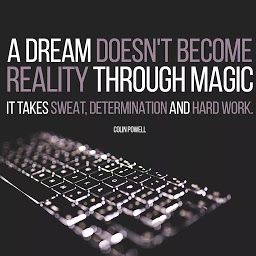 Do not go the safe route.

Most people choose the safe path instead of the one they want to walk, and you can see where those people end up.Caste your mind ahead ten years from now and try to imagine what your life will look like.

Not easy to do, is it? What is certain is that ten years from now there will be people no more capable than you who’ve accomplished amazing things.While we can’t know who they’ll be, one thing is sure: they will be people who have refused to buy into the fears that have driven so many others to settle, play safe, make excuses and eternally procrastinate. They will be people who have consciously chosen to risk failure because they know something more important is at stake. Their life.

Most people will not believe you until you show them hard on proof, ignoring those people is the best thing you can do.

Do not stay around negative people

Both negativity and positivity are addictive and will be transferred to you.Firstly, and most importantly, moving past toxic relationships requires true acceptance of the fact that you can’t force toxic people to change. They may imply that they can change, or you may yearn to be the one who can help them become better, but this is almost always a hopeless project.

Toxic people are not motivated by what’s good for them or for their relationship with you. They’re motivated by their own complex problems and needs. When you give up the desire to change them, it’s much easier to let them go.

Do not be afraid to fail.

Failure is part of the process, at the end you can fail a million times as long as you succeed once.Failure is a thought that drives fear in the hearts and minds of many people. In fact, it can have a paralyzing effect.

But what if we told you failure was a good thing? That instead of being afraid of failure, you should embrace it like a long lost friend?
If you want to see the magnitude of failure unfold, watch a sporting event like the Olympics. For every heat that a Usain Bolt or a Michael Phelps wins, multiple losers are sent packing their things back to the hotel room. At the end of every event, there can be only one winner

Do not give in to your limitations.

We change and grow every single day, test your limits as often as you can to see if they are still limits or just limiting beliefs.If we only dream and take noactionthen we get no further. But if we plan, set a goal and take action then our life takes a different shape.

Now, the important parts ofgoalsetting, though, go way beyond just writing down a goal statement and thinking that somehow your goal will be reached.

To write a goal is only a minor part of the way forward. The rest of the elements of how to reach that goal must also be stated clearly and with a definite time frame to each step.

This means that you must develop a detailed plan of action where each action step is detailed on what you must do, when and how and how much time it will take. If you do not make your plan detailed in this way and set specific target dates for completion, you will simply not be creating any kind of expectation in your mind or urgency that helps keep you moving.

Do not make false promises to anyone, especially not yourself.

Do what you say you will do, no matter what it takes; do not cheat yourself.

Do not manage time.

Managing time is a load of work, instead control your time. What is more work:managingthe world orcontrollingthe world?

Do not eat junk food.

You know what is good and bad for you, do not give in to the temptations.

Do not get addicted to TV or Video games.

The average person spends 4 hours a day in front of the TV… Think about what you could do with 1460 hours a year.

Do not forget to read.

“Reading is to the mind what exercise is to the body.”Joseph Addison penned this quote roughly 300 years ago, before modern science and research equipment could back up his claim. Today, however, scientificstudiesshow that reading does make you smarter. Reading a novel, for example, increases the blood flow and improves connectivity in the brain.

When you read, your brain absorbs good writing techniques and vocabulary. In your own writing, you will unconsciously copy the writing styles of books that held your attention. Reading also enhances your vocabulary and spelling. New words appear in their natural context and you can deduce meaning from the surrounding words, while visually imprinting their spelling for accurate recall.

Do not deny anyone's beliefs.

Even if you do not believe it that doesn’t mean that that belief isn’t real for them. Accept that everyone has different beliefs.

Do not be afraid to say NO.

If you do not want to, do not have the time, or do not feel like it, then just say no.

Do not believe that anything is “impossible”.

Do not have a Plan B.

If you have a plan B, then you will never try your hardest for Plan A. People who succeed despite all odds believe that it is “do or die”.

Do not stay in one place.

The world is vast and there are so many things to learn, most people that reach depression have stayed in one place their entire lives.

Do not eat the same foods.

Make it a habit to eat something new every time you go out to eat. Sure, there will be some flukes, but you will also discover your favorite foods that way.

You can work harder and produce more than you think you can. Work harderandbe smart about it!

Do not compare yourself to anyone but your past self.

There will always be someone better and worse than you, stop comparing yourself to other people. Instead compare yourself to how you were a year ago and notice all the positive changes.

Do not settle for less.

You only settle if you think you cannot achieve it, and that is the same as giving up. Never settle, and you will get everything you ask for.

Do not give up on things you desire. Ever.

The only way to truly fail is to give up. If you never give up failure becomes a stepping stone. But when you give up, failure will be the only result. That is why onlywinnersare remembered for a long time. They are our role models, who teach us that it pays tonever quit. Success only knocks on the doors ofwinnersbecause they are determined in life. On the other hand, a quitter lives most of his life in regret because of his lack of motivation and dedication.

Do not limit your dreams.

You want it, then ask for it and go and get it. It’s impossible you say? GREAT! Be the first one to do it! Anything is possible. Dream as big as you can, never give up on those dreams and never settle. Find a way where there is no way!